NEW SCAM ALERT: There is a scam going around beginning December 2019. This person will text and say they found your pet, but will not provide photos or detailed information. They will say they need you to send them a Google verification code or a scam checker code in order to prove you are the owner. DO NOT send them this code as this a scam. They are attempting to hack into your Google account. 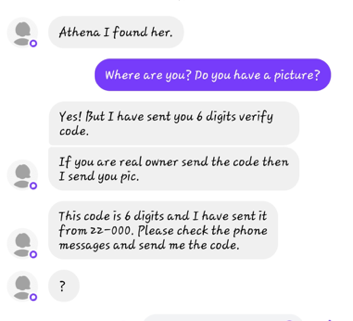 If you are searching for your lost pet, the best thing you can do is spread the word to as many people as possible. Unfortunately, this may sometimes attract unscrupulous scammers looking to profit off your desperate situation.

Please read the following information to protect yourself from becoming a victim.

Found a pet? Scroll down for tips on avoiding the found pet scam.

1. They demand you wire them money first. They may request payment by Western Union, Money Gram, cashier’s check, money order, escrow service, Bitcoin, etc. You can safely assume that anyone who asks you to pay them in this manner (in this context) is a scammer.

2. They won’t meet in person. They pretend to be unable or refuse to meet you face-to-face before initiating the transaction.

3. They will meet, but find an excuse why you should pay them before actually seeing the animal. They may offer to meet you at a public location to return your pet and collect the reward you have offered. When you get there, they may tell you your pet is in their car and will go get him for you as soon as you pay the reward. Once they have the money, they will disappear.

Please scroll down to the bottom of the page to see an up-to-date list of scams.

Example of a Scam: 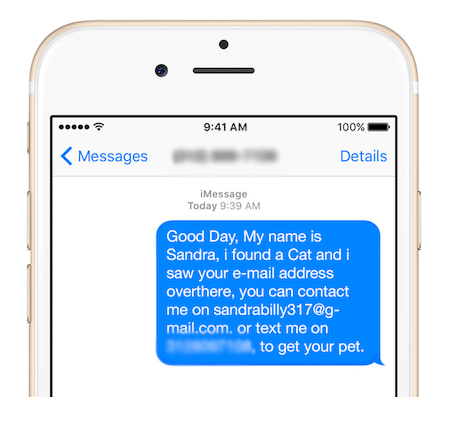 Reported on January 5, 2017: Beware of vague, generic messages from people claiming to have found your pet. The above message came from a real scammer.

Tips to Avoid Being Scammed

1. Never wire money to anyone you don’t know or haven’t met. 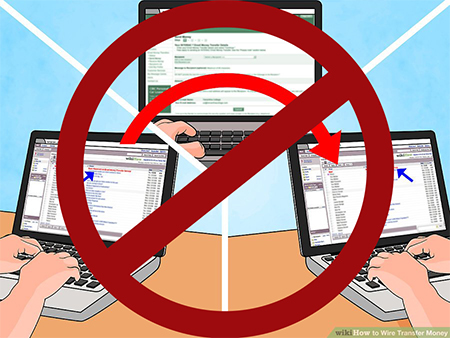 Beware if someone asks you to wire them money before retrieving your pet. Photo Credit: WikiVisual

2. Don’t ask leading questions. If someone claims to have found your pet, don’t ask leading questions like ‘Does he have white socks on his front paws?’ Instead, make them provide the description. Ask the person to describe something about your pet that wouldn’t be visible in pictures that may have been posted. If the person fails to come up with an identifying physical attribute, it is likely they are attempting to scam you. 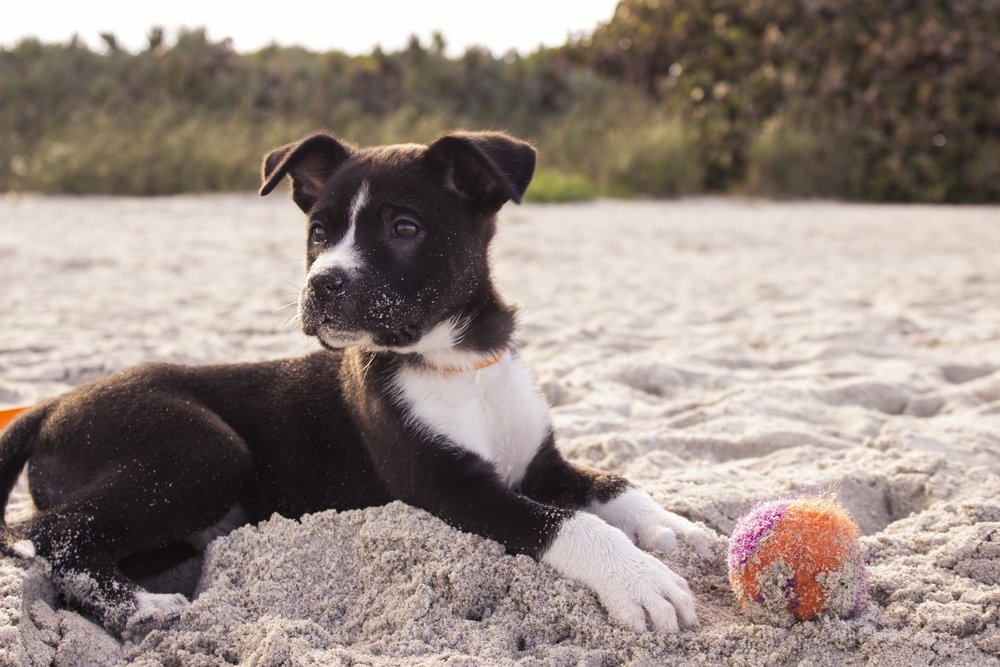 If the person really has your pet, they should be able to describe identifying physical attributes without your help.   Photo Credit: Pexels

Losing a pet is a traumatic experience. Don’t make things even more difficult by falling victim to a lost pet scam. Always be safe, be alert, and don’t give up hope!

Found a pet? Beware of this cruel scam

While people with lost pets may be more likely to become the victim of a scam, people who have found a pet can also be a target. A scammer may contact you pretending to be the owner of the pet you found. In reality, they are trying to dupe you into giving them the pet so they can sell it for a profit. 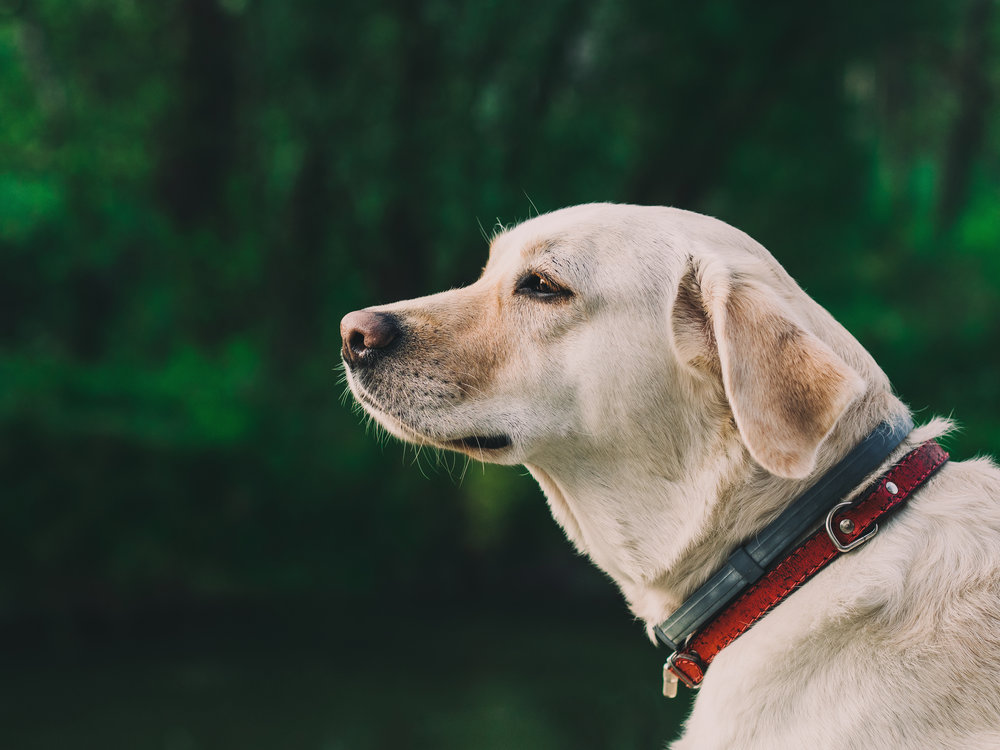 Some pets, especially purebreds, are sought out by scammers to be illegally sold for a profit. It is up to you to verify proof of ownership before giving up your found pet. Photo Credit: Pexels

If someone contacts you claiming to be the pet’s owner, you must verify their claim before handing the pet back to them. Vet records, ownership or breeding papers, and even family photos are all viable ways to prove ownership. If the person is unable to produce any of these, it is likely they are attempting to pull off a scam.

If you are contacted by the owner of the pet you found and are able to verify proof of ownership, that is amazing news! It is always best to play it safe by arranging to meet in a public place to give them back their furry family member. 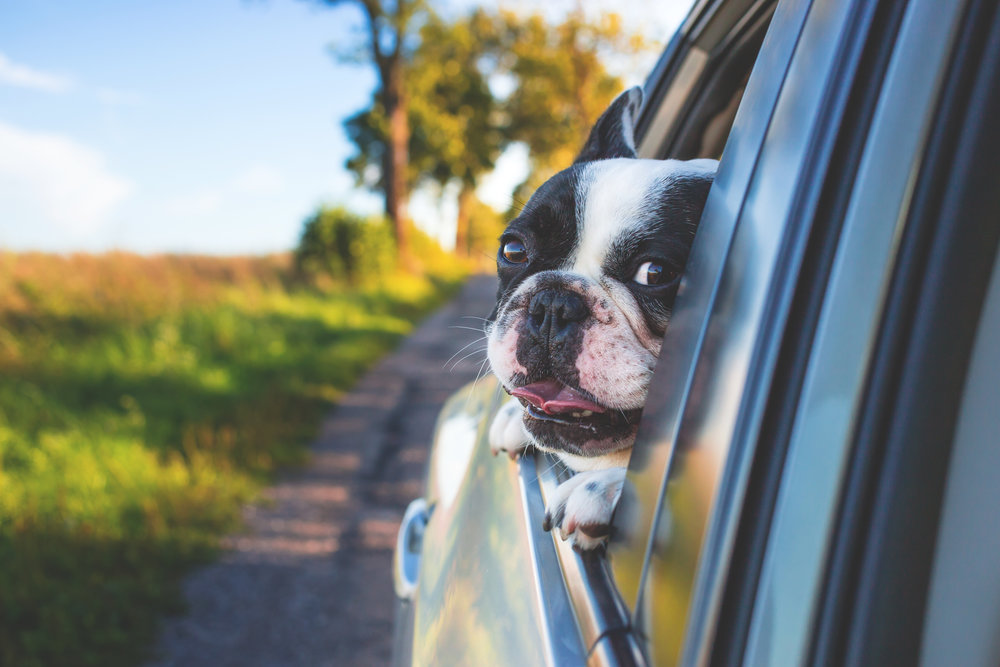 Reuniting a pet with her family is one of the best feelings in the world. Photo Credit: Pexels

Be wary of text messages claiming someone has your pet, but needs payment upfront through a Steam card. There have been reports that the scammer is using the same number (779) 548-5819 to send these texts to various owners. 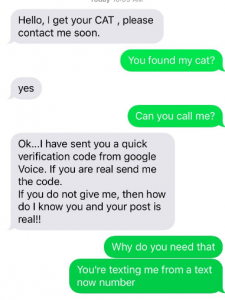 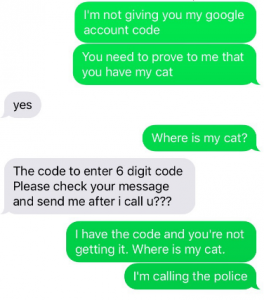 This is the scam as reported by Google: 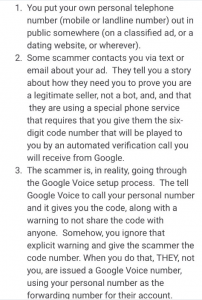 Beware of scammers trying to gain access to your Google account by pretending to have your pet. This scammer was using a throwaway (burner) phone number. 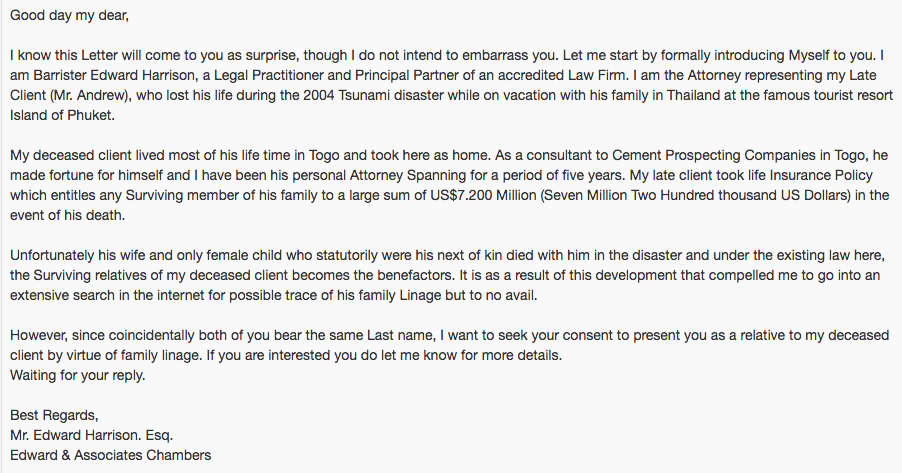 Beware of messages notifying you that a distant relative has passed and you are the benefactor of an outrageous amount of money. They just want to steal your personal information. 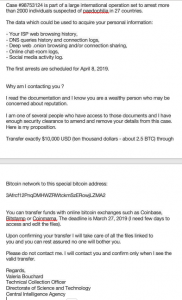 Beware of messages claiming to come from the CIA and demanding you send money through Bitcoin. This email is coming from multiple emails similar to the following:

Someone is texting PawBoost users claiming they have their pet and will demand for money/Amazon gift cards. They won’t send pictures of the pet, but claim to have it. If someone says they’re from PawBoost asking for money this is scam. Please be careful! 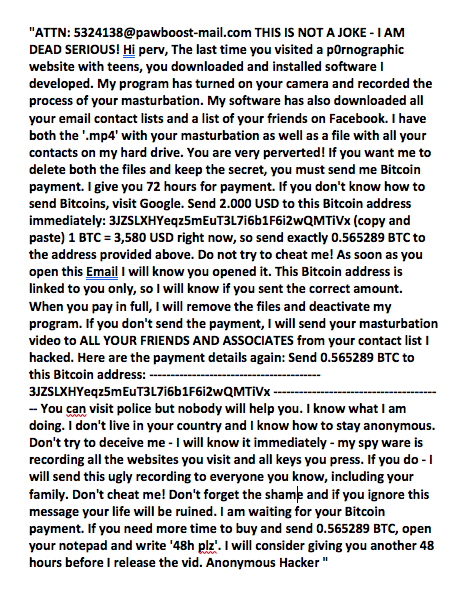 Beware of threatening messages demanding you to send money through Bitcoin. The sender is using various emails with “anonymous” in the domain of the email address. 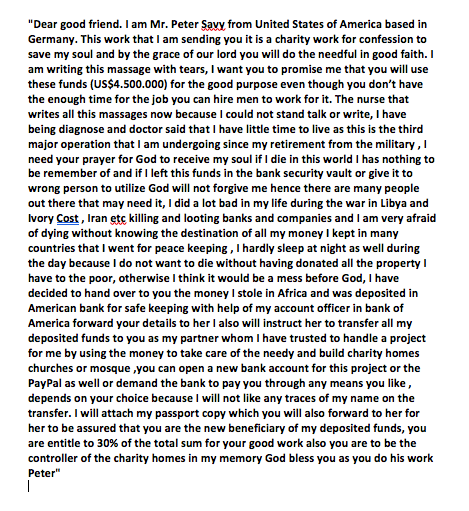 Beware of suspicious charity fund messages from overseas. The sender is using the email petersavy505@gmail.com.

Beware of spam messages regarding business deals. The sender is using the email info@wholesale.com. Beware of weird emails talking about investments. There are about 50 variations of this message that are being sent from info@finance.com. 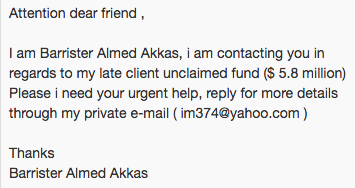 Beware of messages asking for you to contact them in order to send you an outrageous amount of money. The sender is using the email alexdiegu@yahoo.co.uk. 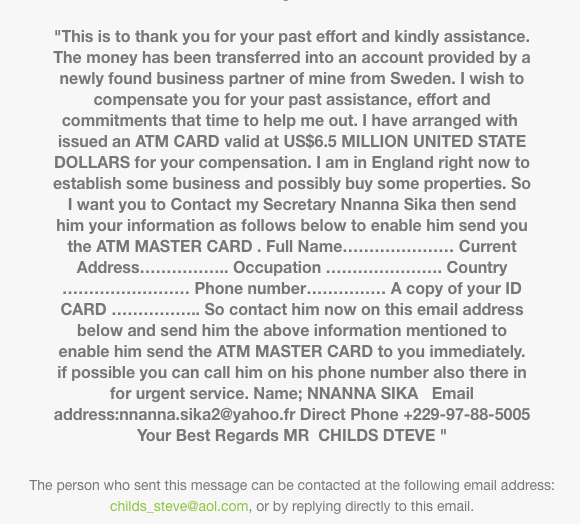 Beware of messages asking for your personal information in order to send you an outrageous amount of money. 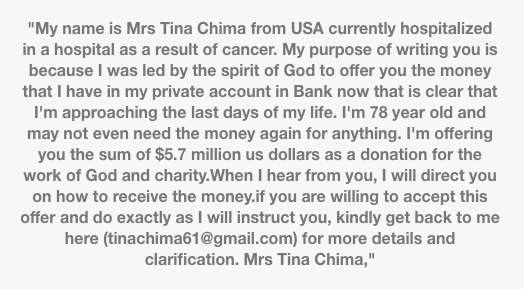 Beware of messages offering generous amounts of money with a fishy sob story. The sender is using the email tinachima61@gmail.com with different variations of numbers after ‘tinachima.’ 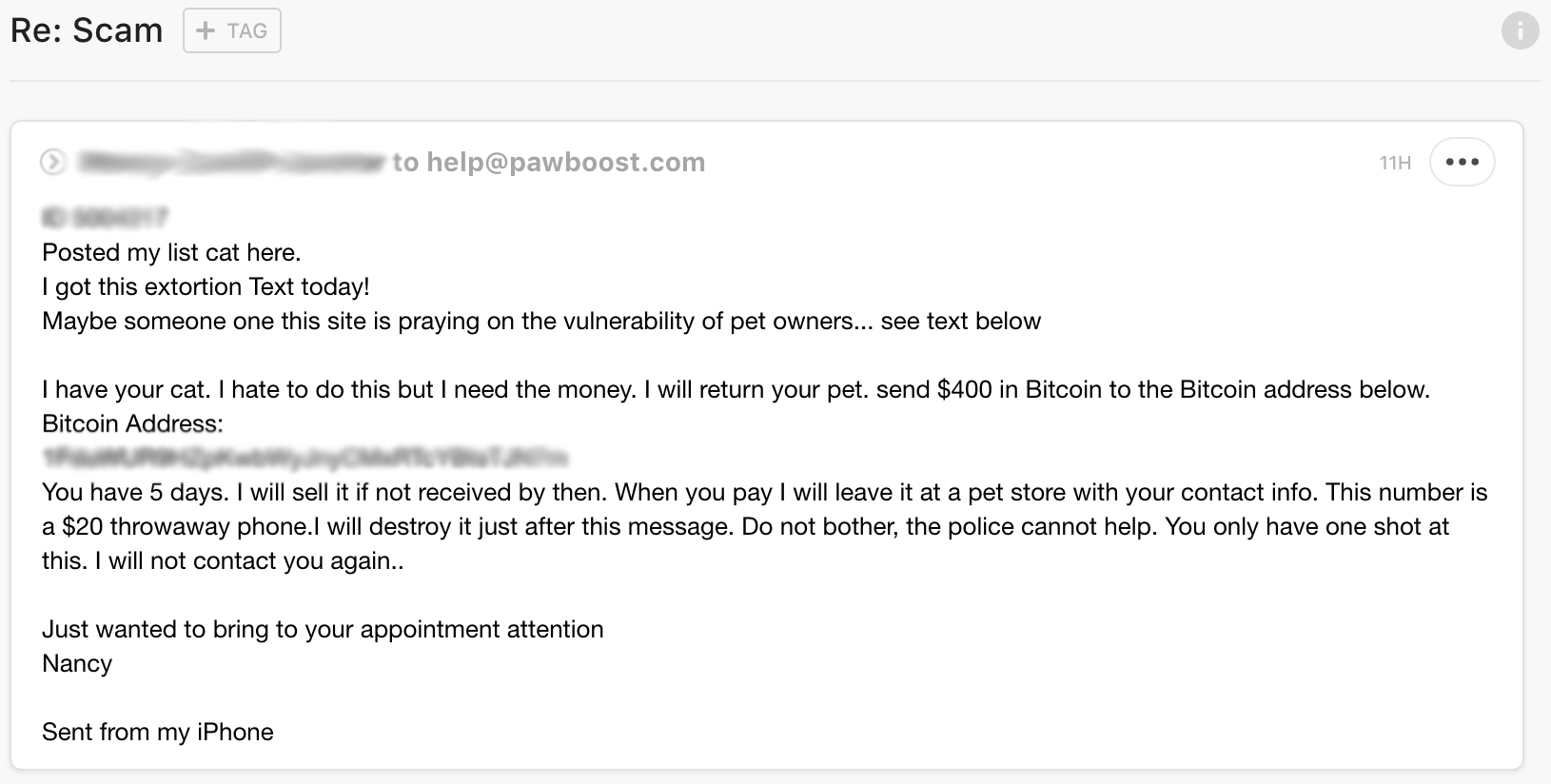 Beware of the Bitcoin scam. The scammer will demand money via Bitcoin to return your pet. 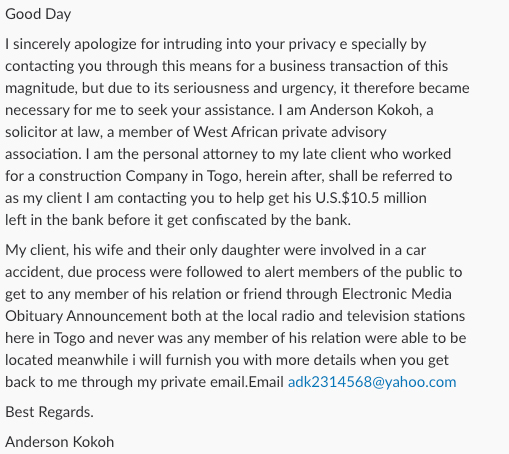 Beware of messages requesting your help to transfer outrageous amounts of money. Variations of this email are being sent around wanting to get your personal information.

Beware of vague, generic messages from people claiming to have found your pet. The above message came from a real scammer.

You can help prevent others from becoming victims by reporting scams like these to support@pawboost.com. If it seems suspicious, it probably is.